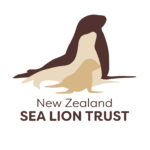 Research is a vital part of the protection and conservation of the NZ Sea Lions. Research undertaken by the New Zealand Sea Lion Trust began in 1995 as part of  former Trustee Shaun McConkey’s  MSc thesis and today we work closely with Department of Conservation and University Researchers on a wide range of research projects.

Please see below for links to previous research:

Robertson. Comment on “Review of research and assessments on the efficacy of sea lion exclusion devices in reducing the incidental mortality of New Zealand sea lions Phocarctos hookeri in the Auckland Islands squid trawl fishery”.

Zaino & Ory –  Impact of tourists  – Student projects conducted at the end of 2004 found sea lions to be very tolerant of people.  The greatest effect came not surprisingly from the  more extreme  actions such as clapping or throwing things at the sea lions to make them move.  This caused them to wake up and aggressively roar at people. Sea lion behaviours were also found to change with time of day, weather conditions and the presence of other sea lions. Sea lions were found to be least active during the middle of the day which is unfortunately when most people go to see them. It is therefore most important to prevent people deliberately disturbing sea lions in order to get photos, when they are resting.

Bleaching sea lions (Shannon Williams) The main focus of this study was to document the annual breeding migration of adult male sea lions, resident in Otago, to the Auckland Island breeding colonies – a distance of approximately 600 km. This involved bleach marking letters and numbers into the hair of adult male sea lions which allowed a DoC team led by Dr Louise Chilvers to record the presence and breeding behaviour of these males in the Auckland Island colonies. Of the 34 adult males bleached, 21 were positively identified in the Auckland Islands and 5 of these were observed holding breeding territories. The quickest recorded migration was just four days! Many of the migratory males showed  evidence of  dramatic weight loss, and often multiple scars from fighting,. My study has revealed a high rate of migration by adult males from Otago to the Auckland Islands in the breeding season. These sea lions are involved in breeding and thus provide genetic input to the population as a whole. The study has also reinforced how easily disease could be spread throughout the entire population.

Breeding behaviour  on Otago Peninsula (Jojo Jackson) This study focused on the breeding behaviour of New Zealand sea lions at Otago Peninsula. Timing and location of births were recorded as accurately as possible for the 2003/04 and 2004/05 breeding seasons. Birth dates at Otago were similar to peak pupping dates at the main breeding colonies. Foraging cycles and attendance patterns of mothers were determined through 10 consecutive days of observation each month from March-June. Otago females were found to have, on average, shorter duration cycles than females at the Auckland Island breeding colonies. This may suggest a better foraging environment at Otago. In an effort to understand the dynamics involved in the formation of breeding colonies, interactions between females ashore were recorded to investigate the gregarious behaviour of New Zealand sea lions. At the Auckland Islands females gather for pupping and then disperse, compared with Otago where they disperse prior to pupping and converge later.

Sea Lions and You 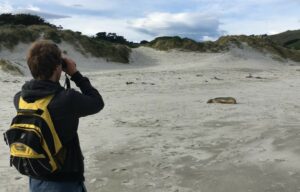 10 metres is a safe distance to view sea lions 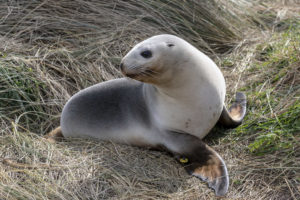 Tasman shows off her identity tag 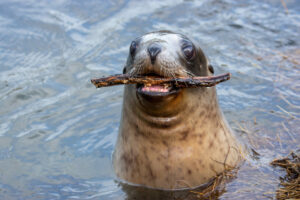 This NZ Sea Lion pup has a present 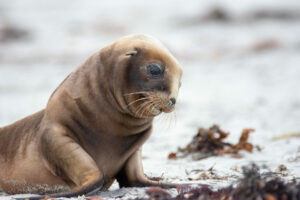 A pup peruses the seaweed store 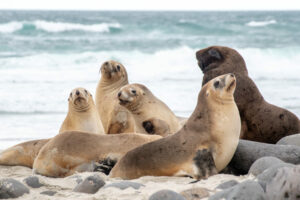 A photo from an NZ Sea Lion board meeting. Year unknown.